Let’s imagine the case when you need to load a large amount of rows into database through Entity Framework application. If you had tried that, you know this process is very-very slow.
1. Worst case for performance

SaveChanges() will open connection, start transaction and make one INSERT, and so on for all records. Then commit that unique record and closes connection.

This time SaveChanges() opens connections and starts transaction just once. Then it emits INSERT command for each record and commits all records simultaneously.

In both cases Entity Framework preserves entities in ChangeTracker with a state Unchanged after saving them in database. When you call SaveChanges() again, it iterates ChangeTracker collection to find what to save. The more items will be in ChangeTracker the more time is needed to process them all.

So you can try to restrict the number of entries in ChangeTracker or disable change tracking mechanism at all.

To restrict the number of entries in ChangeTracker you can do:

So you can save some records (a batch), then get rid of all unnecessary entries from ChangeTracker.

DbContext.Configuration has two options that could improve the performance:

I’ve made a test to estimate the performance for the following cases where I call SaveChanges() method: 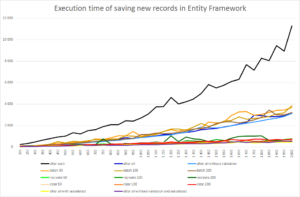 On my opinion, there are two preferable ways to optimize the Entity Framework performance for massive write operations:

I would not recommend to recreate a DbContext cause you can have some additional code executed of context creation. Also recreation will clear EF cache for metadata and queries. These would lead to a negative impact on overall performance.

If you set AutoDetectChangesEnabled = false, don’t forget to switch back when you return to normal operations. Otherwise EF could overlook updates in entities.

Entity Framework has internal capabilities to validate data against the EF model, but there may be a situation when you have some restrictions on the database level. For example, you are importing a large amount of data on a table-per-table basis, and suddenly some rows are breaking the foreign key constraints. In this case database throws an error, sends it to EF, and EF returns DbUpdateException to your code. What’s next?

1) You can examine the entity which caused the exception. DbUpdateException has a property Entries that holds failed entities.
2) If you want to ignore this entity (maybe it’s an expected situation where some data could break foreign key and that rows should be skipped), you need to change the state of DbEntityEntry to Detached. This will remove the entity from context. So it’ll never be saved later.
3) After these steps you must repeat SaveChanges().

The following code snippet is an example of how you can implement the above mentioned logic.

Based on my experiment model (I use it through all Quering Entity Framework posts), I’ve created a simple test with two save operations.

Entity Framework also allows to use explicit transactions. They are described in MSDN article Working with Transactions (EF6 Onwards). My code would be transformed to the following:

Now there’s only one transaction.

2. EF does not use direct T-SQL commands like INSERT or UPDATE. Instead it wraps those commands as a dynamic SQL and executes them with sp_executesql stored procedure.

This wrapping creates execution plan on the first insert (SQL Server needs some time and CPU to compile it), and that execution plan would be reused for any subsequent identical inserts. It’s a very good behavor!

You can run the following query to see what’s in the SQL Server plan cache.

Entity Framework offers two methods to insert records into database. Add() method allows to insert a single entity. AddRange() method inserts an IEnumerable collection. The main question is does the second method provide any benefit over the first one?

The most important is the database performance. I’ve created a simple test where I added single records with Add() method and a List with AddRange(). I called SaveChanges() after each block.

The log in Output window shows that Entity Framework generates the same sequence of T-SQL commands.

Yeah, EF generates single INSERT command per each record.
[UPDATE 2016-09-22]
One benefit is the ease of writing C# code. Another is some internal EF optimization in working with ChangeTracking. As stated in MSDN article Performance Considerations for Entity Framework 4, 5, and 6 “the advantage of using the range methods is that the cost of DetectChanges is only paid once for the entire set of entities as opposed to once per each added entity”. But from the database perspective it won’t give you any gain.

When working with a large number of rows in a table, sometimes you need to retrieve just a part of them. It could be the first N rows (for example, from 1 till 100) or any of the subsequent blocks with N rows (maybe 101…200, or 701…800). The last technique is also called pagination.

You can find the descriptions of these methods in MSDN article Enumerable Methods.

It’s not a good idea to take first rows without any ordering because SQL Server does not guarantee the order of rows, especially when the table does not have a clustered index. But it works and Entity Framework generates the following T-SQL code:

Good! The code is correct, it uses a well-known SELECT TOP statement.

Now I want to get next 100 rows. But Entity Framework requires an explicit ordering now. OK, I place an explicit OrderBy() method.

You’ll be surprised that Entity Framework could generate different T-SQL code here. It depends on the version of SQL Server you’re working with. For SQL Server 2012+ it generates code with OFFSET/FETCH.

* I’ve indented the inner subquery to improve the readability.

Great! Entity Framework does the best it could do here 🙂

LINQ supplies 4 methods to order the result set, and all these methods are implemented in Entity Framework. The first method should be OrderBy() for ascending ordering or OrderByDescending() otherwise. The second and next subsequent methods should be ThenBy() or ThenByDescending().

This LINQ query will generate the following T-SQL code on the model used in all my posts about Querying Entity Model.

If you place two OrderBy() methods in one LINQ query one after another, you’ll get a wrong result – it will be sorted only by the last expression.

So the correct sequence must be OrderBy – ThenBy.

I needed a solution to encrypt a single key in appSettings section in ASP.NET Web.config file. The article on MSDN Encrypting and Decrypting Configuration Sections tells about encrypting the whole section but I want to hide only a particular key.
It seems that apsnet_regiis could encrypt only sections, so I’ve found a way how to extract this key to another section and encrypt that section in one of StackOverflow answers http://stackoverflow.com/a/6224769

Here are the steps that must be done to get the result:
1. Add a line in configSections with the name of your new section

3. In .NET code get the section and key from it

4. After you deploy your Web application to IIS, you should encrypt section secureAppSettings according to the MSDN article mentioned above. Launch Command Prompt as Administrator (it’s important!) and run command (something like this):

I’ve been tested a Web API web service and I needed an anonymous authentication. This can be done with attribute [AllowAnonymous].
You can decorate a whole controller

or a particular method(s)

The most curious thing is that it does not work when you run Visual Studio debugger! The secret is hidden in the properties of the Web API project. Click the project in Solution Explorer, then press F4 (don’t choose Properties from context menu). Here you will see authentication settings.

All these properties are saved in .csproj file.

I work both with SSDT database projects and .NET projects based on Entity Framework Code First models. Now I’ll say some words about how these two types of projects do the deployment.

The main difference between these two deployments is that SSDT database project produces change script based on actual database, whereas Code First Migration does not. So if you use migrations, change your tables only through migrations. Direct changes to database would not be taken into account by migration process.